We have two new murals and photo opportunities in downtown Hickory!

Chris Parsons and Bob Dennis have donated their time to paint these murals for Downtown Hickory. The murals are located on the HMS wall across from the parking deck, at 246 1st Ave NW, Hickory, NC 28601.

Chris Parsons is a native of Fall Branch, Tennessee. He lives in Bethlehem with his wife, Lindee Parsons, their children and menagerie of pets. He earned his Bachelor of Science degree from East Tennessee State University and his Master of Arts degree from Gardner-Webb University. Chris is employed with Hickory Public Schools as the Art Teacher for Northview Middle School. Chris’ artwork has been on display in a variety of galleries in North Carolina including The Historic Gertrude Smith House in Mount Airy, Lenoir Rhyne University and Full Circle Arts in Hickory, The Hiddenite Center in Hiddenite, and The Rock School in Valdese. His work has been purchased for private collections throughout the United States and around the world. 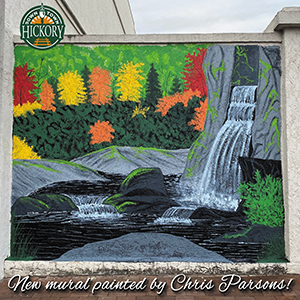 Bob has been involved in the business of art and graphic design since1958, when he began doing commercial charcoal portraits at age 14. After observing art classes at the Maryland Institute of Art in Baltimore Maryland, he began to work in oils, and sold his first paintings in the 1960’s. After a military tour as a Russian linguist from 1966 to 1970, he continued his work with graphic arts, and in 1971 participated in a joint project through the Smithsonian Institute, doing botanical illustrations for the US Navy.

Having moved to Newton North Carolina in 2008, he continues to produce murals, portraits, decorative paintings, and trompe l’oeil. He is an original member and past president of the UniFourArtists Association, and is currently co-founder and president of the Trade Alley Art gallery in downtown Hickory.

These murals were made possible by the generous contribution of Hickory Springs Manufacturing and are sponsored by Hickory Downtown Development Association.